My kids and I watch a lot of That 70's Show...some might say too much. Kerry and I laugh and laugh at the silly jokes and use the characters as descriptors, for example, "You're so Kelso" or "Stop being Red." My favorite character is Kitty Foreman. She's hilarious and reminds me so much of Molly Weasley - if Molly drank lots and lots of wine. Kitty often wears a wrap skirt and, after a bolt of lightning, I realized that it's the same as Tilly's Miette skirt. I'd been debating the pros and cons of digital patterns (the cons were winning!) when I got an email from a pattern seller with a discount code. I decided to browse and found this baby 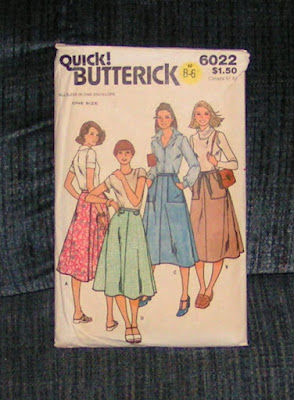 on sale! With the discount code it was just over a dollar. Score! I picked out some fabric from the stash and got to work. When I tried it on to mark the hem I found a problem. The wrap didn't cover my backside! Yikes! I traced the pattern piece and made an extension, cranked some tunes (new Pat Benatar Greatest Hits cd, soundtrack of my youth) and got to work. Now my skirt is done and fits and, well, what do you think? 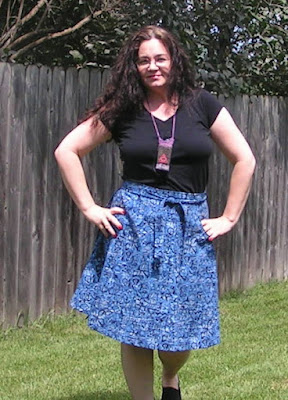 The fabric is another score. It's Robert Kaufman quilting cotton. I got the whole bolt for five bucks at the charity shop. Five. Bucks. I cut off a bit chunk for mom, who quilts, because I share. It's great for this type of skirt - comfortable and fairly light and washable. The design is really busy so my add-ons in the back don't really show. It's covered with flowers, fish, birds...I wouldn't be surprised to find a Tardis! Maybe I'll embroider one. Hmmm... Since I have so much of the fabric I did some dye experiments. I like dyeing things. It's fun to see what happens. Unfortunately, my dye selection is a bit sparse right now, so there will be more experimenting later. It was fun watching the color remover turn the swatch from blue and black to white and gray to cream and orange which dried to cream and tan. You'll see this fabric again, though, in some incarnation. So, in other news, remember the day of testing a couple months back? Well, they hired me! Yay! Monday I start a really great job. I'm super excited. The day starts at 6 a.m. so I've been gradually getting up earlier and earlier even though I've not been sleeping late this summer (except for after my surgery). Maybe by next summer I can go on vacation - I've been dreaming of a trip to the Grand Canyon for years. I'll even go alone if the kids and boyfriend don't want to go. I have lots of trips in mind - Orlando and the Wizarding World, some tropical beach, and maybe even a shopping trip to the mecca of secondhand shoppers, Second To None, that Vix and Curtise frequent. (That trip will most likely be just me since Eric has no interest in Europe at all.) It feels good to be optimistic again. This morning I have to go to court again. My ex doesn't seem to know when to just do what the judge says. I don't want to get into all of the problems I have with that piece of crap. I just hope that this time will be the last time. Okay, time to get ready to go. I'll be back, though, never fear! Have a lovely day!
Posted by Bobbi at 8:09 AM 2 comments: