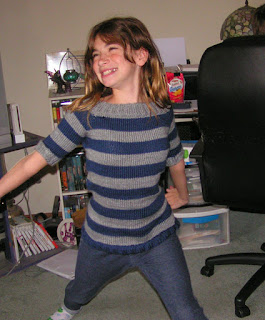 I don't usually knit for my kids. They tend to grow faster than I can get things finished. However, Khloe doesn't have a lot of cold-weather clothes so I knit up the sweater she's been asking for since she joined Ravelry. She's named it the Amazing Blueberry Sweater and has worn it three times since it's been done.
In other news, due to a medical situation in the family I won't be going to the Knittin in the Mitten retreat. I'm so upset. I really wanted to meet Coggie and learn all of the things that a big group of fiber lovers can teach. I have a local knitting group, but we only meet every couple of weeks and sometimes I can't get there. I've never been on a vacation since I've been an adult, either, so getting away would be so nice. I keep telling myself that there will be another chance.
Several of the podcasts that I listen to have book reviews. A recent one has me wondering about some things. Sometimes I wonder if people get good or bad reviews based on who they are and how popular they are. There's a podcast that I quit listening to because she offended me, but she's very popular. She has a book out that's getting great reviews - but I won't be buying it because I don't want to support her. Have books become big sellers that have been written by unknowns? People get famous somehow. No, I have no plans to be published. In fact, I haven't been inspired to buy any knitting books lately - except for the two that are almost $50 each. Do you think that sometimes a book gets bad reviews because of the author or publisher?
I've been having trouble with blogger lately. I can't seem to leave comments on most of the blogs I read. I get some sort of message about not having permission. I hope you all aren't having trouble, too.
Posted by Bobbi at 4:00 PM 1 comment: