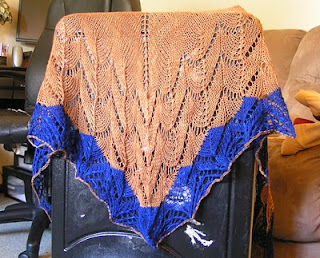 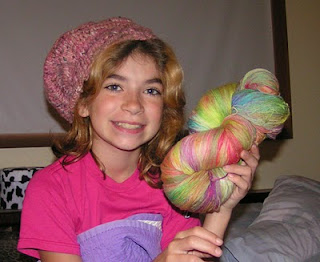 Just a couple of things to share - my new shawl for the release of HP7 in house colors and Khloe showing off her new hat and the skein of yarn that she dyed with food colors.
And yes, I am the only non-fall person ever.
Posted by Bobbi at 9:49 AM No comments:

I'm beginning to think that I'm the only person who doesn't love autumn. All around me I hear people talk about the weather, the pretty colors, etc, but I just don't get it. I look out the window and the neon yellow-orange trees across the street hurt my eyes. In the morning it's 40 degrees and in the afternoon it's 70 and the kids leave their jackets at school so they freeze again in the morning because they don't listen. Our allergies are back with a passion from something and I've developed a sinus infection from it. There are some people around here who think they can burn their leaves whenever they want so the neighborhood stinks. We can't decorate the yard with pumpkins because the disrespectful brats around here think it's funny to destroy them. It's not a good season. I miss summer. I know that in summer it's going to be hot. In winter I know it's going to be cold. There's no kids arguing about if they need a coat or not. Sometimes I like winter - warm socks and sweaters and blankets are so nice. I don't much care for spring, though, either - it's mud everywhere, including in my house. There are a couple of things that I enjoy about fall, though. I can't get enough caramel apples and pumpkin pie.
I'm listening to Coggie and the Savvy Girls talk about their adventures at Rhinebeck with envy. I want to go! Eric said he'd help me save up so I can go to some knitting events and party with my podcasters. It would be so much fun to laugh and be silly with Coggie, Deborah, and Melanie, don't you think? I hope that when I go all of the podcasters will be there so that I can meet them all. I think the best part of any festival would be meeting people. When Khloe gets a bit bigger I could take her with me if she wants. Of course, she'd probably want to run away with Melanie to be a gerbil mom.
Speaking of Khloe, I just went to a parent-teacher conference. My girl is a straight-A, above average, excellent reader. She loves math. Unfortunately, though, she gets a bit chatty in class. She's had the same classmates and teacher for the past two years so she's very comfortable with everyone. I'd like to make her teacher a shawl as a thank you gift - Khloe loves her and really listens to her. It will be for the end of school, so there's time to plan. Maybe by then the perfect pattern and I will find each other.
More Kerry news - I tookhim to the doctor because he's got a big bump on his leg. It turned out that it's not a bruise - it's a cartilage and bone growth called osteochondroma. He had an MRI last week and did really well - no freaking out or getting scared. The result from that is good news - it's not cancer. We will go back and discuss options with the doctor in a week. Most likely he'll need surgery.
I'll finish up here with a request - if any of you know of some Steampunk or Victorian waistcoat/vest patterns or where to buy one affordably, please let me know. I'd like to add to my wardrobe and a snazzy vest with a chain would be great. Thanks!
Pictures soon, I promise!
Posted by Bobbi at 12:08 PM No comments:

We had another computer crash recently which is why I've been absent. Apparently our Windows had a virus and everything had to be moved to a backup while the tech guy reinstalled Windows for us. Then comes the fun part of putting everything back where it's supposed to be. I got the pleasure of reinstalling itunes and finding that it wasn't the current list of my podcasts so that took an hour or so. I'm still putting my bookmarks back to the "favorites" tab - and finding new favorite places, of course. I had about 250 emails to sort through even after going to the library once to check it. Eric has his user account done - but then, he only has his internet browser and nothing else. The girls haven't been over to see that they need to redo all of their accounts. Thank goodness we have an external hard drive for our pictures and such - I'm paranoid about losing my pay patterns so they're stored there - and in a flash drive and some are on my kindle. Actually, I filled up my flash drive and need a new one. That's alot of patterns!
I spent most of September knitting a cardigan for myself in some great pink wool. I got it all done, put it on, and it's WAY TOO BIG! My gauge swatch lied! I get to frog the whole thing and do it all over. I love the cardi - it's the Birthstone Cardigan in the latest KnitScene. It looks so good in the baby pink I'm using. I can almost feel myself wearing it - being warm and cozy while watching snow fall outside. I'll have to do some gauge work, though, so it's perfect this time.
This month, so far, I've been hat crazy. I've made four hats out of handspun that are very thick and squishy. Khloe has claimed one to wear all winter. I've got a few more hats that I want to make - and I'm obsessed with getting the Wolly Wormhead collection of sideways-knit patterns - as soon as I get the cash saved up. What's the exchange rate for pounds, anyway?
Speaking of Khloe, she got bored one afternoon. After much internal struggling I gave her a big skein of superwash merino to dye with food coloring. It's gorgeous and colorful - she used all of the neon green and most of the other colors. Now we need to find a pattern for about a thousand yards of fingering weight that's not a shawl. She's tiny, though, so maybe we can pick a sweater or something.
Let's see, what else...Oh! My friend Jenny is selling her spinning wheel....to Me! (donations for the payments will be accepted ;)). I've been doing some practicing with it and it's very, crap - I can't think of the right word. It's like my hands and feet know instinctively what to do - it's strange. I really enjoy it. Of course, so far it's all bulky but I like bulky - great for warm hats!
I've had the great pleasure of introducing my son to Doctor Who. He's very taken with it. He's gone through the seasons with Rose and Martha and is now watching Donna. I, on the other hand, have been watching the classic seasons on Netflix. I can't get enough! I'm aching for a scarf, too. I thought about asking for the yarn for Christmas but Eric thought it was a bad idea. I plan to get the paint chips suggested by Tara Wheeler and write the yardages for each color on the back so I'm prepared for any situation. I'll link Tara's site on the side. She's my new cyber crush - she even met David Tennant! She's like the ultimate Doctor Who fan.
I'd better run - I can hear the girl child calling for me and I need to get some pictures uploaded for your viewing pleasure.
Posted by Bobbi at 11:16 AM 1 comment: