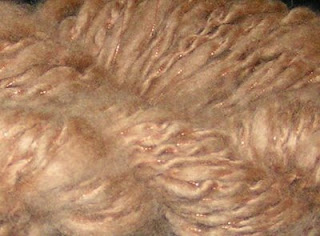 I finished spinning the camel down and can't wait to get some more. It's plied with copper thread so it shimmers and sparkles and it made me sad that all of it had to go to the knitters for the quiddich team. I guess I'll have to make more! 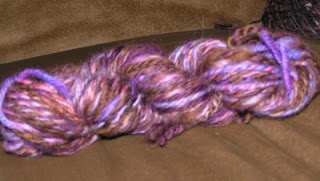 Since I'm not able to knit right now I dug through the fiber stash and spun up this great stuff - purple, orchid, and brown wool. There isn't much, but I'm thinking it will be great as trim for a purple and brown striped sweater. I don't usually like brown but I really like it paired with purple - but of course everything looks better with purple! 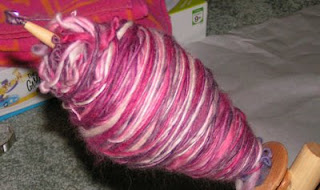 Right now I'm working on a braid of roving from squoosh on etsy. The colorway is Berry Tart, and it's full of berry goodness - lots of pinks and plums. I want to ply this with some thread, too, but use several colors instead of just one. I want some sparkle on this one, too. I spun it all on Jenny's kick spindle which I really enjoyed.
With all of the practice I've had lately, I'm starting to get pretty good at spinning. I really like it - it's very calming and engaging yet mindless at the same time. 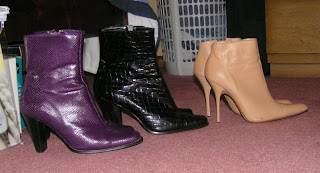 Check out the score I got at Goodwill last week! Six dollars a pair for these great boots. Unfortunately, my feet are getting as achy and painful as my hands, so I won't be wearing them for awhile. They'll look great when I can wear them, though.
The other day I got in the mood to look at knit skirt patterns. In my quest I discovered so many great patterns in my stack of magazines - loads of great sweaters that I had forgotten about. I'll be marking all of the ones that I have stash for so I can (hopefully) get working on them soon. I've told myself to start using all of my magazines and books instead of letting them gather dust. We'll see how long that lasts.
Posted by Bobbi at 6:56 PM 1 comment:

Have You Seen These? 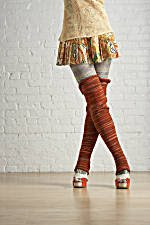 This is one of the new patterns from Lion Brand yarn to go with their new sock yarn. I love these so much but that much knitting in fingering weight would take ages. BUT - they have a version in worsted weight! I am dying to cast on. The problem? It's written as flat knitting - a long, thin strip of stockinette. I need to convert it to round so it will go faster. Won't this be cute under a skirt this winter? The bottom is like stirrup pants, so pretty socks would show. They also wouldn't be too bulky under boots, which would look great. Does anyone else plan to make these?

Ideas - My Head Could Burst!

I usually don't go for long without lots of thoughts of projects. Lately, though, it's been crazy. Since I'm home and have both stash and access to millions of patterns I've decided to make some gifts this year. The first gift also goes along with two knitalongs - the Harry Potter House Cup and the Selfish Knitters for October - make something for your hands. I've decided to make a pair of Dashing armwarmers for my brother. I think he'll like them - he spends alot of time outside doing his social things and he's a snappy sort of dresser. Of course, they will be made out of Simply Soft since I now have several skeins grabbed off of the clearance rack, but a washable yarn will probably work better since I'm sure his hands get alot of use - paintballing, biking, etc. I want to make him a cowl, too, out of the deliciously soft superwash merino that I got at the fiber fair last summer. Wool will keep his head warmer, don't you think? Mother loves the green Wollmeise from the club shipment, so she'll be getting a pair of socks, but I haven't really settled on a pattern - maybe Fawkes since I enjoyed it so much. I'd like to make her a pretty, lacy cowl, too, but I'm not sure. Mom, would you like something like that? (she's a reader!)
More ideas came in the new issue of Knit 'n Style. There's a really good article on steeking. I really want to try it now. Yes, the thought of cutting my knitting is a bit unnerving, but it's also kind of adrenalizing in a way. I'll be studying my Elizabeth Zimmermann for cardigan ideas - maybe something cabled since I've conquered that knitting milestone. Besides, can a person really have too many cardis?
I got a surprise issue of Verena knitting in the mail the other day. Oh my gosh. It's full of wonderful things. I want to make almost every pattern in it - seriously. I will be starting one rather soon, one I decide on the yarn for it. My issue is the summer one, but I want to make a sleeveless top that will work over a long sleeved shirt, too, so it will work for the upcoming coldness. For real, though, check out this magazine. It's fabulous.
I haven't gotten alot of help in the pain area lately - changing meds just has been messing me up. I can't knit or crochet nearly as much as I want to - and do in my head - so mostly I sit around frustrated. However, I just finished watching season one of Torchwood. Wow. I got the set free with my Dr Who, and I'm so glad. Torchwood is a great show. I want to find season two now and then find when it's on tv so I can keep up with it. The characters are so deep and interesting. I was surprised with the language - it's on BBC so the swearing is more like HBO - and there was some backside male nudity. It's not for kids but it's good and I recommend it to any sci-fi lovers.
What else? I suppose that's all for now - it's a no-kid weekend, so there's relaxing to be done! After the housework, of course.
Posted by Bobbi at 1:11 PM No comments: