Yesterday I was getting settled for a nap when Khloe came in and asked if we had a white pillowcase. I told her no, but the pillowcases are in the closet. Why? It's a surprise, she said. While I napped she made me this - 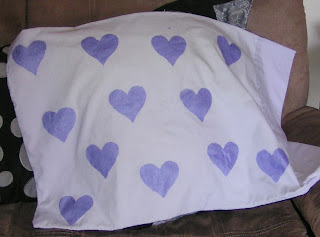 She made a heart stencil and painted me a pillowcase. Isn't it pretty? I'm a bit nervous about using it - the paint isn't for fabric, so it will probably rub off. I love it, though. She's such a sweetie. Have you had a surprise gift made for you? Please tell me about it!
Posted by Bobbi at 12:44 PM No comments:

While I was on hiatus I spent a great deal of time sorting out my button collection. I have loads of buttons - old, new, gifted, purchased...all are beautiful and wonderful. When I see a button jar at a thrift shop or yard sale I just have to have it. I love looking at them and imagining what the previous owner was going to use them for or how old they are. I have some that were my grandmother's and I try to imagine what she had in mind for them. Some of them are new and are from Joanne Fabrics or Wal Mart that I got because I had a project that didn't work out or they were cheap and cute. My button collection makes me very happy and keeps my imagination going. Here's what I've been doing with them:

I'm still sorting out some of them and haven't made jars for the metal ones. I have a jar for the leather ones that's not in the picture. So, what have I made with buttons lately? These! 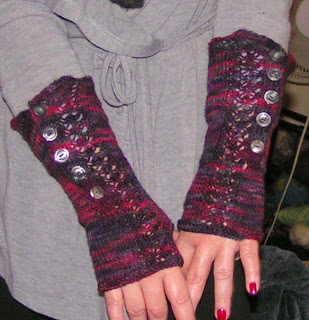 These are the Forbidden Forest mitts from the Unofficial Harry Potter Knits book. It's a fast and easy pattern. I used some yarn from Storied Yarns called Irial. I don't remember what book the character came from that inspired the colorway, but I think it looks good with the pattern - and it gave me an opportunity to use some of my gray buttons. Later today I'll be adding more patterns to my pinterest board. I've hit a snag, though. The 80s are considered vintage. I'm not ready to classify my teenage years in the same range as my mother's, you know? I do have some 80s patterns that I don't have pictures of...but I'll get it done. Did you know that early 90s is also vintage? Seriously. (Don't get me started on the grunge comeback. Ugh.)
Posted by Bobbi at 2:10 PM No comments: