So after talking about my wish for new music last week the strangest thing happened. The new issue of Hispanic magazine came in the mail (no, I'm not hispanic by a long shot and don't know why I get the magazine since I didn't order it but it's interesting) and the whole issue is about music! There's a big article about new artists and the style they perform. I must sit down one of these days and look all of them up, maybe on YouTube, to find the ones I like most. See, although I'm about as ethnic as mayo I love latin music. I have a couple of Flamenco cds that really must be played more often - one of them is Charo, remember her? I love Charo - she's always been such a unique character. I'll probably wind up spending a whole day listening to new-to-me artists because one person will lead to more and the next thing I know the kids will be home from school all crabby because I forgot to pick them up and it's pouring or something.
Actually, I know how I am. I have a serious podcast and audiobook addiction because one leads to another and the author/host will mention one I'd not heard of and the search is on again and, of course, itunes has a selection on the side of other podcasts or books that other people like and that leads to more...you see my problem. I've learned to not subscribe until I listen, though. I seem to be very particular about what goes in my ears. Unpleasant voices don't get listened to again. People who smack when they talk - you know what I mean - may get another chance if the content is good enough. If a podcaster yawns they're done. I've heard two podcasters yawn while they're recording - if they're boring themselves then why keep talking? I'm kind of picky about pronunciations, too, but I try to remember that different regions say things differently. That all being said, I love the availability of free audio pleasure. I know, I don't have the links on the side yet, but only because I'm still working on it! I keep finding new authors and podcasts! I'm so amazed at how much brilliance is out there - as a sci-fi lover I'm in a kind of hog heaven. I just finished a three-book audiobook that still makes me crazy because it's so incredible. (The author just got published, too - buy book one if you don't do audio - it's called Seventh Son and it's crazy good - no, he's not paying me, either.)
I follow several actors from the Harry Potter movies on twitter and they're hinting at awesome stuff! The next two movies sound to be amazing. I'm so excited already that I can't sit still. Tom Felton tweets when he gets his hair bleached in preparation for Draco and, poor guy, he gets bleached alot. Have you seen him as Tom? Wow, he's a good-looking guy. As Draco he's not so appealing to me but I think it's, you know, just because of the character. I follow Matt Lewis, too - Neville, one of my favorite characters, and not just because of the upcoming SuperNevilleness that's being filmed. He's so funny on twitter. I've told y'all about twitter before. Why don't you tweet yet?
I'm a member of several forums, as you know. Lately, though, I haven't been very active in the groups. The House Cup has gotten so big that I feel lost. I've kept up with the activity - there's alot going on with some of my classmates, but I just don't have much to say. You know, though, it doesn't seem to have been noticed by anyone. I used to be very active, chatting with people, commenting on all of the great projects, etc, but my lack of participation doesn't seem to bother anyone. It's kind of depressing. Does anyone miss me?
I suppose I should get going - I joined FlyLady and now have a cleaning schedule to work on. FlyLady, which I will link to, is a great site for those of us who get overwhelmed trying to take care of a whole house and everything that goes with it - even the stuff that I'd never think of. So I'm off to care for my home. Have a great day!
Posted by Bobbi at 9:12 AM No comments: 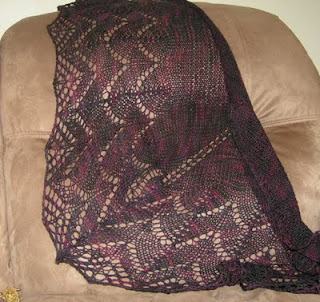 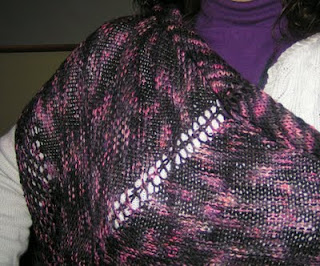 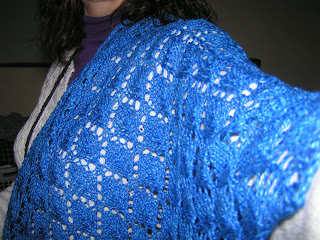 I've been knitting shawls! Not big huge ones, the small shoulder shawl/shawlette/triangle scarf shawls that are everywhere on ravelry and are so cute and easy. I just finished a fourth one that for some reason wasn't as much fun as I thought it would be - when it's blocked I'll post a pic of it, too. The top picture is the Travelling Woman shawl. It knits up so fast. I used some Socks That Rock in Lenore and love how it turned out. I've worn it alot - not with the point in front though. I need to get used to that look. The second one is a skein that Jenny dyed called Gothelberry Pink. I named the shawl Lucrezia because it kind of reminds me of something Lucrezia Borgia would wear while poisoning her next victim. I love how the colorway knit up with just bits of pink and blurs of purple where the dyes ran together. She needs to dye some more so y'all can make some shawls with it! The third one is inspired by Theodore roosevelt for DADA last month. I dyed the yarn blue to represent how he loved being outside. The pattern is called Forest Canopy - he found out that he'd become president while hiking in the woods. I haven't worn it yet but Khloe has - she wrapped up in it a couple of times when she got chilled watching Teen Nick or Disney Channel. I've printed out patterns for about ten more of these little shawls. I can't resist them right now, and I have plenty of sock yarns to work with. Of course, I should be working on gifts right now - some of the assignments in both the House Cup and the Battlestar Galactica groups fit well with what I have planned for people - but you all know that I tend towards selfishness sometimes - especially when I've been dealing with a sick child. I can only handle so much Zack and Cody before I want to scream, eat candy, and be a brat. I'm sure you know what I mean.
I've been up late lately blogging in my head - then can't exactly remember everything I wanted to say. Jenny suggested that I talk into my voice recorder and then type it out. It would be handy to be able to plug the recorder into the computer and just have all of the words appear and then I could just add pictures and edit. I don't see that happening in my near future, though, so I'll have to get used to the sound of my voice - after I get used to saying it all out loud and hoping that the family doesn't think I've lost it!
I've been thinking alot about music lately. Yes, I listen to songs on my ipod - it's not all spoken content. I love listening to my favorite songs and feeling the notes and instruments flow with and around each other. I dug out a box of old cassettes the other day. I used to listen to them at work - when I had my own office and could listen to music. I surprised myself by remembering the words - all I ever wanted, everything I've waited for, build my world around you... I met the man who sang it once and he told me that he'd written it for a very special person. I'm blanking out on his name but I was surprised at how small he was - pictures of him always seemed so big, but maybe it was just the hair (late 80's, you know). I pulled out another tape that my brother had made for me - beautiful stuff that should've gotten more popular than it did - if wishes were horses, then dreamers would ride, baby. I need to get some itunes cards and make up some playlists. My tapes will be gone before long. I need to check out some new stuff, too. Maybe some of you could suggest things - or send a cd?? - that I may like. I suppose for now I'll listen to Stevie sing to the poet in her heart and let Debbie tell me that my hair is beautiful - and agree with Joey that I wanna be sedated! He he!